I’m never shy about reaching for seconds of Thanksgiving turkey poised next to a mashed potato swimming pool filled with golden-brown gravy. And I don’t feel a pinch of guilt taking extra helpings of my mom’s stuffing laced with Jimmy Dean sausage, walnuts, and mushrooms.

But after two days of cholesterol-friendly holiday fare and microwaved leftovers, we decided to break camp and head up to Baltimore for the 13th Annual Micro Brew & Oyster Tasting at Kooper’s Tavern.

The temperature had dropped considerably since we last emerged from our Thanksgiving cave, so we bundled up and braved the 35 m.p.h. wind gusts along the Fell’s Point waterfront. Strolling down the cobblestone streets, we breezed past eateries that we’d frequented months ago in pursuit of steamed crabs and tiki drinks, and set our sites on the fall conquest – fresh oysters. 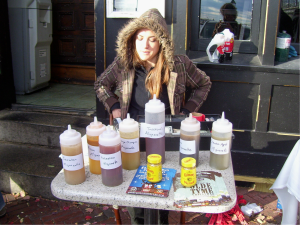 As we rounded the corner onto Thames Street, we spied a bright red awning that signaled we’d reached Kooper’s. An eager crowd was lining up in front of a gal selling tickets for oysters. Her table offered an impressive array of mignonette sauces. Traditional, cucumber, cilantro-apple, orange-tarragon, and Asian were among the sauces displayed in tall plastic squeeze bottles. Bowls of home-made cocktail sauce were overflowing.

The ticket gal handed us a sheet of paper and explained the lay of the land. The oyster price tag was $1, $2 or $3 each, depending on the type. We were welcome to eat outside and enjoy the crisp Bay breeze, or seek shelter inside the century-old tavern. We opted for indoor warmth.

We settled into a boisterous room with an oyster station flanked by TVs playing rugby matches and college football. With one of the five specialty micro-beers in hand, we began to consider our options. The list showcased a spread of oysters that read like the Who’s Who of Atlantic Coast bivalves featuring stand-outs from Virginia’s barrier islands to Canada’s rugged shoreline. With 24 varieties, we needed a plan. 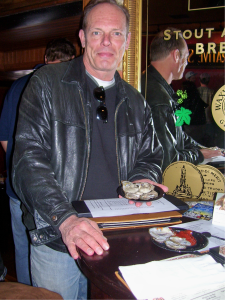 At first, I got sidetracked by the unusual oyster names like Beavertail, Fire Lake, Pickle Point. And the “Little Bitches” from Magothy Bay, VA, seemed like they should be sassy and hard to open. Bill approached the list like a champion Risk player, conquering one geographic region at a time.

We started close to home with familiar species like Maryland’s Choptank Sweets and Virginia’s savory Chincoteagues and Nassawadox Salts. Their fresh briny taste sparked us to order more. We barely took time to admire the differences in shells, because that might slow us down.

I switched to a crisp Chardonnay as we migrated north. Connecticut Blue Points instantly caught my eye. They were the 18th Century darlings of the East Coast until Chesapeake oysters stole America’s heart. I couldn’t resist slurping this piece of seafood history that was nearly extinct by the 1900s.

Bill requested a couple of Massachusetts Wellfleets, but then ran into a snag when he learned that our room’s oyster station had no Rhode Island Wilds. He ran to the outside shuckers and scored a few, along with a plump pair of Potters Moons from Maine. Dodging the rowdy sports crowd, he brought his plates of treasures to the table unscathed. The smooth buttery taste made his efforts worthwhile. 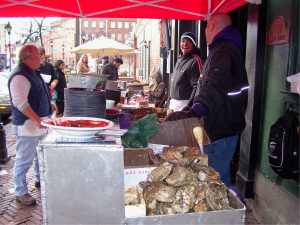 With almost two dozen mid-Atlantic and New England oysters under our belts, it was time to end our oyster crusade in foreign soil. Our siege on Canada began with a sampling of Malpeques, Salt Aires, and Tatamagouche oysters. These were pretty tasty beasts, but when our server brought us a plate of oversized Canadian Cups, we knew who really wore the crown on Prince Edward Island.

Having reached our fill, we asked for the check. The waiter nodded in approval as she cleared away our massive pile of shells. As we walked back to the car, happily discussing our favorites of the day, I noticed that my stomach was sloshing around more than normal. Thirty-something oysters can do that. So I started looking for a little starch to settle my belly. Bill picked up a final four walking oysters for the road.

Only two blocks up Broadway, my wish was granted. Inside a deli, I spotted an orange neon sign that glowed the word “Pierogie.” Nothing makes this Ukrainian gal’s heart putter like a little dough stuffed with cheese and potato. In fact, my parents required us kids to eat at least one before we were allowed to open our Christmas presents.

With a six-pack of warm pierogies and a pound of smoked kielbasa under my arm, I knew I wouldn’t make it to the car without popping at least doughy delight in my mouth along the way. And as the temperature continued to plummet, I realized it was beginning to feel a lot like Christmas.