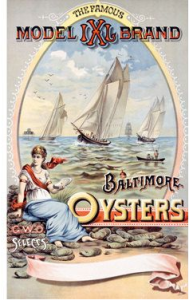 Chesapeake Bay oysters were once the divas of the world’s seafood stage.  But global demand nearly decimated the bay’s oysters, so they’ve been playing second fiddle to New England and West Coast bivalves. Now they’re back on top again, ready to reclaim their place as world-class oysters.

In 1929, Cole Porter wrote a song called “The Tale of the Oyster” about a social climbing bivalve who lounged on a silver platter among fashion queens and millionaires. The tune fit the flamboyant Gatsby era, when champagne flowed at high-society affairs and Chesapeake oysters were the rage. The savory delicacy was slurped down at unimaginable rates, and watermen scoured every corner of the bay to keep up with the world’s voracious appetite. 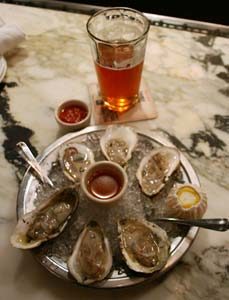 The supply seemed inexhaustible, but within 50 years of the release of Porter’s song, over-harvesting, disease, and pollution had annihilated the Chesapeake’s oyster beds. In the mid-1800s, the bay cranked out 20 million bushels of oysters each year. By the late 1980s, the annual total catch plummeted to about 20,000 bushels.

Sending Out an S.O.S.

In the 1990s, government agencies, businesses, politicians, and watermen banded together to save the bay. The Oyster Recover Partnership returned 1,200 tons of recycled shells to the bay to create bivalve homes, and the Chesapeake Bay Foundation planted 150 million oysters along the bay’s shores. In turn the oysters, which filter about 50 gallons of water per day, helped clean up the mess people had made of their habitat—that’s like drinking a keg of beer daily to make your neighborhood a better place to live.

Slowly but surely, the bay and its oyster population have come back. Virginia aqua farmers sold 31 million oysters in 2013 – that’s 10 times the 3.1 million sold in 2006.  And the forecast for 2014 is even brighter, with 51 million oysters expected to hit the market. For centuries, watermen worked the bay’s bottom until it was nearly tapped out, but new aquaculture techniques offer sustainable solutions. Today’s farmed oysters, grown inside protective cages, taste as delicious as wild oysters, and aquafarmers can now create oysters year-round, breaking the old rule of only eating oysters in months that contain the letter R.

But despite cleaner waters and ecofriendly production methods, the bay’s aquafarmers ran into snags when they first started bringing their wares to market. Chesapeake oysters had a tarnished image of being nearly extinct or carrying disease. To squelch consumers’ concerns, oyster farmers embarked on an East Coast tour to showcase the new and improved Chesapeake oyster, and to the highlight the strict health- and food-safety standards they had adopted.

Pappa’s Got a Brand New Bag

Nobody bellies up to a bar and asks for “a beer.” You name the specific brand you want. Likewise, to make the most of these recently returned, scrumptious bivalves, it helps to know what you’re asking for. The bay is home to one native oyster species, Crassostrea virginica, so the region’s bivalves often get lumped into one group, and many people think they all taste the same.  But Chesapeake oysters come in a medley of flavors, from Maryland’s buttery Choptank Sweets to Virginia’s salty Chincoteagues.

To counter this misconception, many aquafarmers are turning to catchy marketing to separate their oysters from others in the bay. Similar to that of craft beers, the witty oyster branding is intended to create memorable identities and build market loyalty. Some brand names play off oysters’ legendary aphrodisiac powers—a night of nibbling on Skinny Dipper, Forbidden, or Pleasure House oysters could tempt you to misbehave, but you might need a dozen Sweet Jesus oysters for some morning-after redemption.

Geographic names that reference an animal are another favorite theme. Virginia offers a menagerie of oysters such as Dragon Creek, Eagle Flats, Parrot Island, and Stingrays. Tough guys might be attracted to War Shores, Shooting Point, or Battle Creek oysters. And how could anyone resist a cool plate of Fat N’ Happy Oysters?

Somewhere Beyond the Sea

The hot trend in today’s oyster business, according to Tim Devine, owner of Barren Island Oysters on Maryland’s Eastern Shore, is “access for everyone.” Linen-tablecloth and crystal-glass establishments aren’t going anywhere, they’re part of the oyster lovers’ tradition, but now there are oyster bars to fit everyone’s wishes and wallets. Newcomers to the oyster scene are greeted with sample plates and tips about which kinds to try. 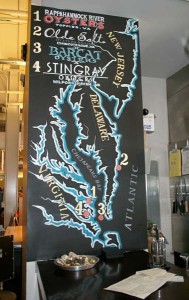 Eat The Rich will pop a cork if you want a little bubbly with your bivalves, but innovative pairings of oysters with beer, cocktails, or sherry are in high demand. Order a Natty Boh with a dozen Rappahannock River oysters, an excellent choice. Flying Dog Brewery makes an oyster stout called Pearl Necklace that goes well with sweeter oysters. Brown suggests trying one of their pitchers of cocktails, such as Drink the Martini: gin, vermouth, and orange bitters. “And sherry and oysters are a magical combination,” he adds, “especially an almost salty Manzanilla sherry with the super-briny Olde Salt oysters.”

In Annapolis, Blackwall Hitch also rocks the boat by serving local oysters in an easygoing environment. A chalkboard on its 18th-century brick wall heralds the day’s fresh catch from the bay, such as Barren Island, Holy Grail, and Shore Thing oysters, to name a few. Jeans and t-shirts are acceptable—the cuisine is upscale but the atmosphere is entirely relaxed.

Some restaurants are so dedicated to resurrecting local bivalves that they custom order oysters grown just for them. Ryleigh’s Oyster Bar, a beloved seafood spot on Baltimore’s Federal Hill, partnered with Shooting Point Oyster Co. on remote Hog Island in Virginia to develop the farm-to-restaurant bivalve Avery’s Pearls.

These days, thanks to the resurgence of the Chesapeake’s oyster population, those buck-a-shuck oysters you eat in corner pubs are the same delicious ones served on silver trays by waiters dressed in tuxedos.  They’re all delectable Chesapeake oysters grown in coves and rivers along the bay by a new wave of watermen. It’s the best-kept secret in town. But not for long.