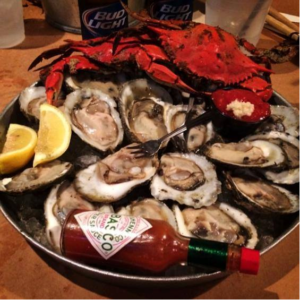 Imagine tying up the boat on a hot August afternoon and grabbing a seat at your favorite dock bar.  With a frosty drink in hand, you think about the cool pleasure of a dozen fresh oysters.  You picture them nestled in their shells on a silver tray with crushed ice circled around a tiny dish of cocktail sauce.  You almost smell the sprits of squeezed lemon – but then you remember the saying, “Only eat oysters in months with the letter R!”

Fortunately times have changed, and that old wife’s tale doesn’t apply any more.  Fresh local oysters are available all year round – thanks to new aquafarms that are spreading around the Chesapeake shores and breathing life into the old oyster industry.

The wild Chesapeake oyster was such a prolific creature that its massive reefs were navigation hazards for early explorers.  Its sweet-briny flavor was an irresistible delicacy for seafood lovers around the globe. 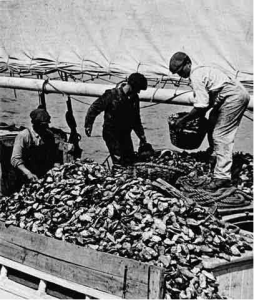 In the heyday year of 1884, Maryland and Virginia watermen pulled in 15 million bushels of Chesapeake oysters.  Some used long tongs to pluck them from the water.  Others dredged the bay bottom with sharp metal baskets that scraped up everything in their path, wreaking havoc on the habitat and leaving lifeless mud it their wake.

The supply seemed endless, and the Bay appeared indestructible, but the ill-fated native oysters couldn’t reproduce fast enough to compete with human consumption and gluttonous overfishing.  Along came MSX and Dermo, a pair of plague-like diseases that killed millions of oysters, and the 2010 harvest plummeted to 185,245 bushels.

Industrial and agricultural pollution also had their way with the Bay’s wild oysters.  After almost 99% of the Chesapeake oyster population was depleted, the endangered bivalve cried uncle.  Government agencies and environmental groups put limits on fishing, created sanctuaries, and went after polluters, but the future of the Bay and its precious oysters was looking pretty bleak.

A ray of hope has come from a collaboration of watermen, marine biologists, and entrepreneurs determined to save the Bay’s bivalves by thinking outside the box and bucking tradition.  In the 1990s, this group started developing a new method of raising oysters, which aimed to protect them and replenish their numbers – even if it means wild oysters have to live in cages.  That’s right … cages.

This innovative concept is called aquaculture. Here’s how it works.  Rather than relying on the benevolence of Mother Nature to create favorable conditions for oysters, aquafarmers integrate science and technology into the mix.  Very little is left to chance.

The process begins in hatcheries, such as Horn Point Lab in Maryland and J.C. Walker Brothers in Virginia.  Fertilized eggs are placed in a customized cocktail of algae and water to provide the nutrients oysters need to grow.  The microscopic oyster babies swim around for two to three weeks until they’re ready to move into nurseries where they continue to eat and mature.  At this point, they are so small that 500 can fit in the palm of your hand.

In some labs, crossbreeding takes place to create select types of oysters.  For example, triploid oysters are engineered with three sets of chromosomes that leave them sterile.  Without the worries of reproduction, triploids can focus all their attention on growing.  Since you don’t want to eat oysters during their breeding period, this genetic alteration makes them available in restaurants any time of the year. 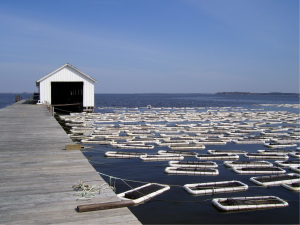 When infant oysters, called “spats,” develop a gluey foot, they attach to hard surfaces like old shells or rocks.  Then they’re ready to head out into the water, and the magic of aquaculture starts to unfold.  Instead of following the traditional method of dumping vulnerable spats into the Bay and praying they’ll survive, aquafarmers provide recycled shells where oysters can take hold and place them into floating cages about the size of a coffee table.  These safe cages or “floats” will be home until they’re full grown.  They float on the water, chained together in rows and hooked up to docks.

Why cages rather than free-ranging?  They protect fledgling oysters from predators such as crabs, stingrays, and human poachers who are notorious for raiding protected reefs and oyster sanctuaries.  Plus, aquafarmers can move the cages around to make sure they get the right amount of clean water and algae – and avoid areas that are polluted or prone to disease.  And farmers can take their oysters on flatbed trucks for field trips to the ocean’s salty waters to increase their salinity and flavor.

A Bushel Full of Benefits

Wild oysters take two to three years to grow to the regulation three-inch market size.  Aquaculture oysters only need 12 to 18 months, and they’re available year-round.  And because they’re spawned from native Chesapeake oysters, watermen don’t need to import disease-resistant foreign species that could cause problems for the ecosystem.

The Bay’s water quality is also reaping big rewards, because aquafarming is escalating the oyster population.  In 2010, Virginia planted 76.6 million oysters in Chesapeake waters.  Three oysters can clean 165 gallons of water every day – that’s enough to fill three whiskey barrels.  Imagine what millions more of them can do.

Virginia, which embraced aquaculture years before Maryland, is already seeing economic perks from this new way of producing oysters.  Commonwealth hatcheries sold 2 billion oyster larvae for spat-on-shell production in 2012, according to a report by the Shellfish Growers of Virginia.  About 28.1 million market-sized Virginia-farmed oysters were sold in 2012, generating $9.5 million.

With so much to gain from oyster aquaculture, one of the few remaining obstacles is acceptance of change.  Generations of watermen have earned a living by tonging or dredging oysters from their boats.  Converting them to this new mode of business will take some time and positive results.

If you would like to visit an aquafarm along the Bay, call in advance, most aquafarmers are pleased to show off their facilities – and maybe let you sample a few oysters pulled fresh from the water.